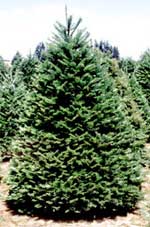 Description: The largest native evergreen tree in New Mexico and Arizona. It is the most important timber species in the United States & is one of the commercial species of New Mexico. The tree is rather a botanical puzzle, for it bears strong resemblance to spruce & fir as well as to hemlock and yew. Accordingly, it was described as a “false hemlock with a yew-like leaf.” Younger specimens are cone-shaped & foliaged to the ground; older trees retain the conical shape but elevated off the ground with increasingly rugged, craggy trunks. Will tolerate both full sun and considerable shade.

Needles: Densely set, soft, flattened, slightly pointed, dark green, 1/2 to 1-1/2 inches long and grow around the twig so as to give it a full-rounded appearance. 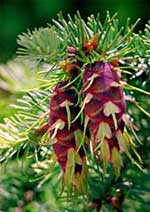 Cones: 1-3/4 to 2-3/4 inches long with reddish brown, thin-rounded scales. They have distinctive three-pointed bracts (the “Neptune’s trident”) that are especially noticeable during the blossom stage. Unlike cones of true firs, these hang down from branch. 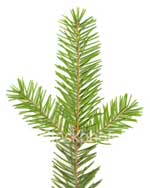 Soils: Almost any soil except one that is waterlogged.

Uses: Widely used as an ornamental & Christmas tree, as well as a timber tree. Multi-row windbreaks, in the central rows or between central rows & outside rows.

Management Care: There are no known serious insect or disease problems. Can take wind. Resistant to oak root fungus.